With 1.4 million sold annually, robot vacuums make up about 7% of the floor care market; 1 in 15 people own a robot. This number has tripled over the last two years! iRobot makes up nearly 50% of that market. 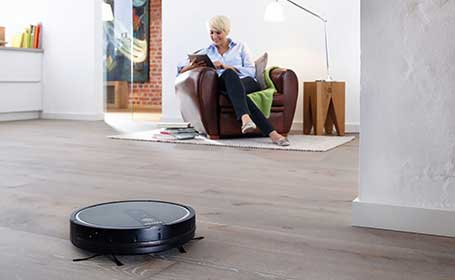 The RX1 Scout is Miele’s first Robotic vacuum cleaner! Featuring Smart Navigation, the Scout accomplishes remarkable cleaning results. Its lithium-ion battery can clean up to two hours or 1,600 square feet on a single charge. A gyro sensor measures its rotation, allowing it to change direction as needed and a ceiling camera maps out the room ensuring precision cleaning of the entire room.

The RX1 Scout features a Triple cleaning system which includes a turbo brush, two long rotating side brushes for those hard-to-reach areas and an effective suction system. Sensors on the front prevent the Scout from bumping into furniture and more sensors underneath prevent it from falling down stairs. It also features four cleaning modes and a remote control.